Two weeks until I visit Norway! 🇳🇴 I can not wait!!

Posted by April McNulty at 12:57 PM No comments:

Yesterday while I was driving during work I started singing "My Favorite Things" from The Sound of Music. The main line on the song says "I simply remember my favorite things" for when one feels down. It clicked with me about how the writers of the song knew a good approach for mental health and redirecting thoughts to positive thoughts. We often encourage this in behavioral health. On a spiritual note the Bible says, "if there be any virtue, and if there be any praise, think on these things." Philippians 4:8

Posted by April McNulty at 10:21 PM No comments:

The last few weeks have been full and my heart is full too! 😊
I had my birthday on August 20. The years seem to go faster now. God is so good and has blessed me with wonderful family and friends. I was in the Chattanooga area during most of that weekend and was able to see Sunset rock and the Walking bridge as some of the highlights. 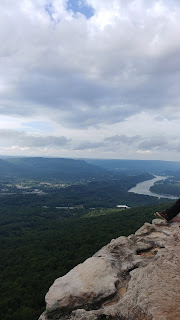 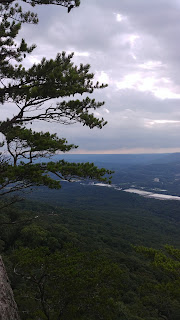 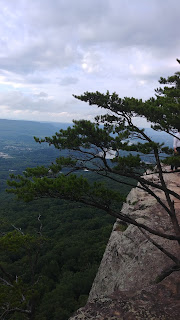 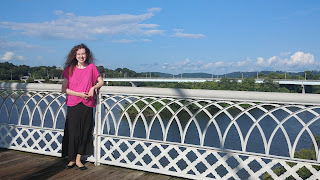 I am also so happy to be back in the Madison campus choir in Nashville. We are family. 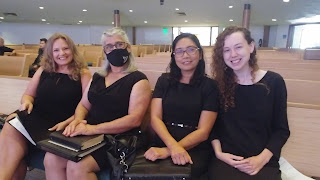 Posted by April McNulty at 1:45 PM No comments:

This blog post to add to my previous blog post about how the Lord led in getting the job that I have now. The last few months have gone by so fast. A lot has happened since January!

It was a Monday morning and my phone ran in the office I was working in. I was not able to take the phone call then but I listened to the voicemail as soon as I had the opportunity. It was the program director, from Health Connect America and he informed me they were looking for a Master's level therapist. I called him back to follow up on the phone call. We discussed possible times to interview. I was going to be flying out of state to friend's wedding at the end of the week but I would be able to meet with him shortly after Christmas. On December 27, I drove through the heavy traffic of Nashville and arrived for my interview.
I interviewed for a good hour and shared my aspirations and passions in social work. The program director discussed with me the opportunity for a need for my interests in Hickman county. After the interview we discussed the next steps before being offered a job. I earnestly prayed in the days afterwards about the opportunity. On January 15, I was offered the job!!!

My experience getting started out with my job has been awesome from the beginning. On my first day a young lady who mentored and answered questions for me by phone as I was in the process of applying for the job took me out to lunch at La Fuente restaurant in Lewisburg, TN. It was nice to meet her in person!
My training with the other in-home worker in Hickman county was also awesome. On the first day I trained with her I met with her at the court house in Hickman. I accidentally went to the old court house before going to the new court house to meet with her. My first sights and sounds of Centerville was of the old court house in the picture below: 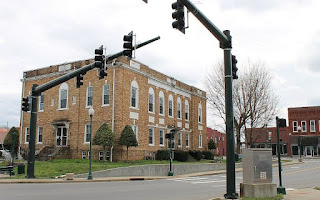 I love my job and doing what I do everyday. It is rewarding to help children with anger and behavioral problems and work with families in their home environments. It is also fulfilling to provide emotional support to children who have had very difficult backgrounds in their families. I also do a lot of coordination of care with case managers from the state, primary care providers offices, and guidance counselors.

I wake up every day filled with God's love for me. I also remember that God has a plan for my life!
Posted by April McNulty at 12:18 AM No comments:

I want to share an important update that has happened in my life. On January 22, 2020 I started an in-home therapist position! It is rewarding to work with children and families and keep them together. I am very thankful for the God's providences in my life.

I want to share this promise with you as I reflect on God's leading,

"For I know the plans I have for you," declares the Lord, "plans to prosper you and not to harm you, plans to give you hope and a future." Jeremiah 29:11 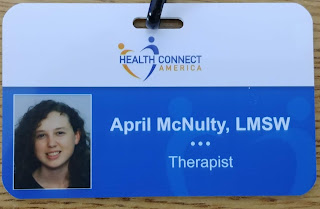 I have thought more about my grandmother recently and miss her. She was the matriarch and spiritual leader in my family. Everyone looked up to her and she was someone that you could always talk to.

She has a special family history. Her grandfather and his family accepted the Adventist message in Norway before coming to the United States.

Her spiritual influence had a big impact in my life and the values that she taught her family carried into my family.

I decided to journal my conversations with her during her last months of her life and I am so glad that I did for they are interesting to read.

Here is one of the conversations:

Special moments were spent with Grandma today. After lunch today I read to her the Sabbath school lesson. It was about the faith of Abraham. I had to read two passages in the Bible to understand the story of Abraham going to the top of Mount Moriah to offer Isaac as a sacrifice. At the end we were both contemplating on how Abraham had a lot of faith to have almost lost Isaac on the altar. But he also had faith to believe and told his son Isaac that God would provide a lamb. I remember Grandma agreeing with me about Abraham's faith and saying "yes". Also, I remembered studying and being taught as a child that Abraham placing Isaac on the altar was an indication of God saying that His beloved Son would one day die on the cross.

Every day is precious with her. I am so glad I have the time to spend my summer vacation caring for and watching her. It's been a blessing to me.

Another one of my favorite conversations with her was about how she met my grandfather. When I asked her about the details about how their interest for each other developed she said, "Those are very happy memories. Thank you for asking me to recall." They met in Loma Linda, CA and had a lot in common. They both grew up in big cities, Chicago and New York and their families came to the US from Europe. Their mutual love for each other was evident. At the end of the conversation when I said to Grandma, "I really enjoyed talking to you about that." She said, "Well, April. It's my favorite subject." 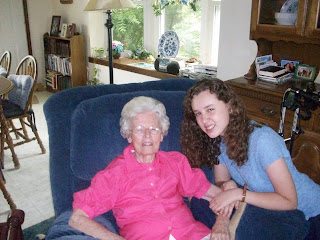 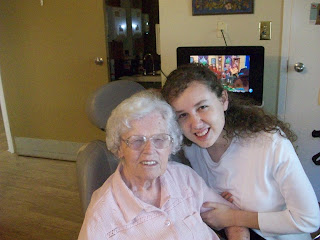 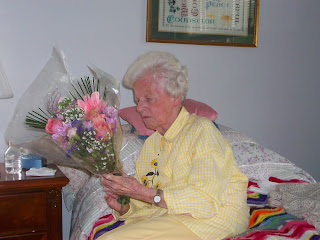 My uncles, mother, and aunt with her at her 95th birthday party 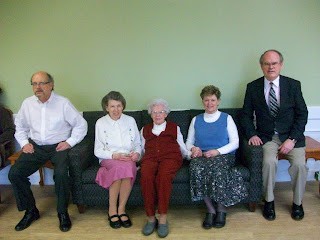 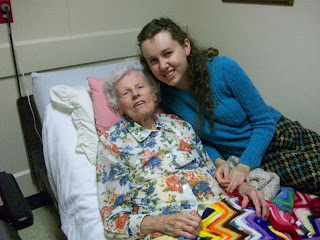 I will always remember Grandma!


Posted by April McNulty at 2:28 PM No comments:

There is a special place in Madison, a suburb very close to Nashville. One of the reasons it holds a special place to my heart is because my grandparents attended Madison College many years ago. 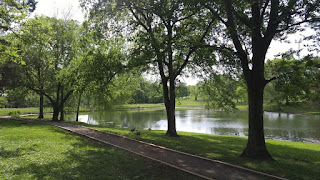 This place has Adventist history dating back to the time of Ellen White. Ellen White had an important role in helping the Adventist work to start in the Southern states. She gave instruction to Percy Magan and EA Sutherland about righteousness by faith and true education. True education is physical, mental and spiritual found in the first angels' messages in Revelation 14:7. In 1904 Percy Magan and EA Sutherland who were working at Battle Creek College saw the need for work they were doing there to come to the South.

Magan and Sutherland met with Ellen White and her son, Edson White and crossed the Cumberland River on the Morning Star. The boat broke down in a place called Neely's Bend near Madison. They came and looked at this horrible looking property with rocks. Sutherland and Magan knew about gardening and thought this was the worst kind of soil. Ellen White said, "the Lord has shown me this is where you are going to start your school." 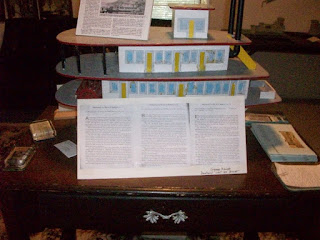 We can find what Ellen White had to share about that experience in her writings, "The work that these brethren [E.A. Sutherland and P.T. Magan] can do because of the experience gained at Berrien Springs, is to be carried on within easy access of Nashville, for Nashville has not yet been worked as it should be. And it will be a great blessing to the workers in the school to be near enough to Nashville to be able to counsel with the workers there." LDE 105.2

Magan and Sutherland bought a farm on that property and started a school with fourteen students. In the school they had a nursing and medical program, industrial work and had a strong agriculture program to grow crops for livelihood. Madison College became an example of true education and was the blueprint of the divine model. It had a work and study program in the school, sanitarium, and a farm for agriculture. The sanitarium was the beginning of the medical missionary work in our church and Ellen White said, "it would be instrumental in establishing the faith of many in Bible truth."

The influence of Madison is far reaching. Some of the students wanted to start other schools like Madison and use what they learned about agricultural methods and community education. All of the Adventist schools in the South were started because of Madison College including Highland, Pisgah, and Georgia-Cumberland academies. Also, several Adventists have started medical missionary programs here in the States and around the world. It was also the beginning of ASI (Adventist Laymen's Services & Industries). 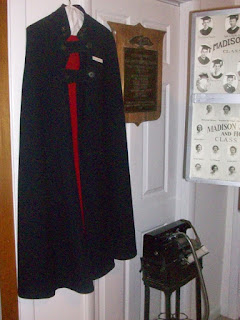 On a personal note my grandfather, Albert Dittes was not an Adventist growing up. He lived in New York and wanted to become a doctor. His second cousin, Frances Dittes was teaching dietetics at Madison College. She encouraged him to take the pre medical program. As a result of his time at Madison College he became an Adventist.  He then went to medical school at Loma Linda and met my grandmother, Elinor Steen. He came back to TN after medical school to practice. My grandmother also took some classes there after they were married to further her career. My family owes a lot to the mission of Madison College.

In conclusion Madison College was the model of true education that has spread to our whole church in school systems, medical missionary work, and agriculture. Our church is spreading the three angels' messages through this work. May we remember the work of our pioneers and the special history behind Madison College. 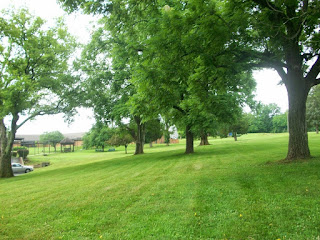 Posted by April McNulty at 1:10 PM No comments:

April McNulty
I'm passionate about young people finishing the work, through revival in our churches and comprehensive urban evangelism.